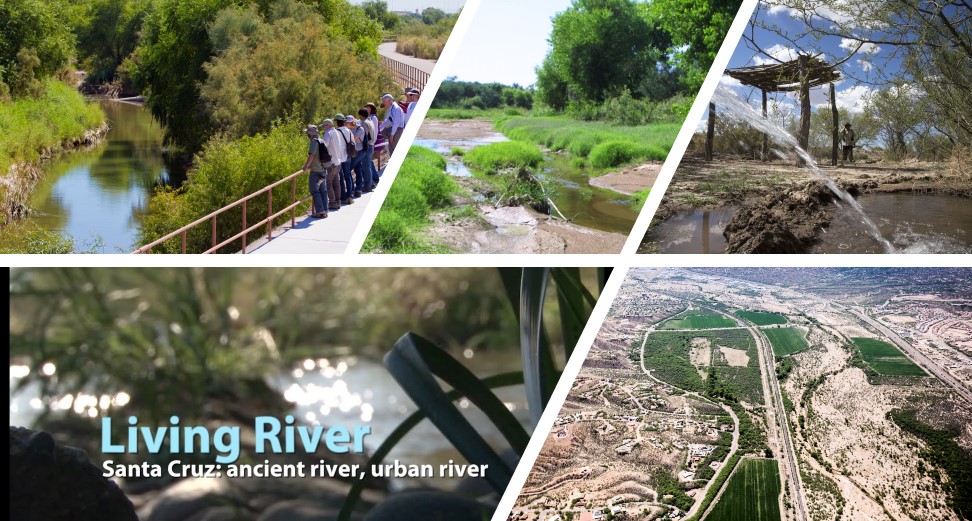 The Living River Project—through written annual reports, e-media, public outreach activities, and “Living River of Words” (LROW) school outings—has become an inventive tool for educating people about the effects of wastewater treatment on local wetlands. It uses an innovative approach to convey a sense of the values of new wastewater technology for an extensive riparian ecosystem that depends on that water resource.

Southwest rivers offer rare, vital oases for wildlife and people in an unforgiving desert. The Santa Cruz River near Tucson is an example, drawing people to life-giving waters for more than 12,000 years. Though the river has changed dramatically since its waters provided a cool, shady retreat to early inhabitants, the river endures with continued benefit to wildlife and communities of southern Arizona. The Santa Cruz near Tucson continues to flow year-round thanks to the release of effluent – highly treated wastewater. This effluent use re-creates the community’s flowing-river heritage, recharging its aquifer naturally, supporting rare wildlife habitat, and building a valued community amenity.

Along the Santa Cruz River, as effluent created a thriving river ecosystem, the community responded by building river parks and “The Loop” recreational trail along its banks to provide easier access to this river bounty. Effluent in the Lower Santa Cruz River is not new: two large regional WRFs have been operated here by RWRD since the 1970s. What has changed is the quality of effluent being released. In its largest public works project ever, Pima County invested more than $600 million to upgrade the facilities, which came online in 2013.

To gauge conditions of this valuable ecosystem and track the impact of a community investment to improve water quality, Pima County and the Sonoran Institute—with funding assistance from EPA—developed the report series, A Living River, for the Lower Santa Cruz River.

These reports document annual changes, in order to gain insight into the river’s wetland health. Beginning with baseline monitoring in 2013 (prior to reclamation facility upgrades), the River series is a thorough assessment of the wetland conditions created and affected by the effluent, and is intended for a diverse and non-technical audience. Since the baseline report, the Living River Project has produced three more annual reports documenting improved wetland health by examining environmental indicators in a 23-mile stretch of the river each water year.

Over the three years since the upgrades, annual Living River reports have documented profound improvements in the wetland health along the effluent-dependent Santa Cruz including:

The Sonoran Institute conveys Living River Project information via e-media through their website by posting annual reports and by making the raw report data available for download. When the annual report is used in a classroom setting, students can access the data, and produce graphs which compare the data to water quality field measurements that their class has conducted. Also available online are two videos produced by the county:  Living River, which covers the Project generally, and Living River of Words, which highlights the interactive student experience.

The Living River annual report series captures Pima County and Sonoran Institute’s collaborative efforts to describe the benefits of improved water quality to the community. It has influenced public consciousness about the Santa Cruz River’s transition from an environmental liability to a community amenity.