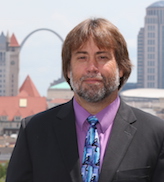 Brian Hoelscher, Executive Director & CEO of the Metropolitan St. Louis Sewer District (MSD), has over 35 years of engineering and management experience. He is responsible for overseeing all district operations and managing all financial, leadership and regulatory responsibilities including the multi-billion dollar, multi-decade capital program for the District. Brian began his career with the District in May 1995 as Manager of Construction. Prior to be named Executive Director and CEO in March 2013, he ran MSD’s Capital Program from 2003 thru 2013 as the Director of Engineering. Prior to joining MSD, Brian was the St. Louis area office manager for CTE, an AECOM Company.

Brian earned a Bachelor of Science in Civil Engineering from Washington University in St. Louis where he has been recognized with an Alumni Achievement Award by the School of Engineering.  He is a licensed professional engineer in Missouri and Illinois. He is a member of the Water Environment Federation, the Missouri Water Environment Association, the Engineers Club of St. Louis, and serves on the Board of Directors of the National Association for Clean Water Agencies (NACWA) and serves on an Executive Committee at Washington University in St. Louis.